A Womans World: Mayweather VS Alvarez

Walking through the crowd with three belts, the WBC Diamond,WBC Silver World, and the IBF World, a crowd of people swarm to take pictures. Interview after interview of those people who follow boxing, who ask about the future of boxing, future fights and United States coverage. Everyone in boxing was around, including some of the best boxers, some of the best coaches, some of the best announcers, and some of the best prospects. 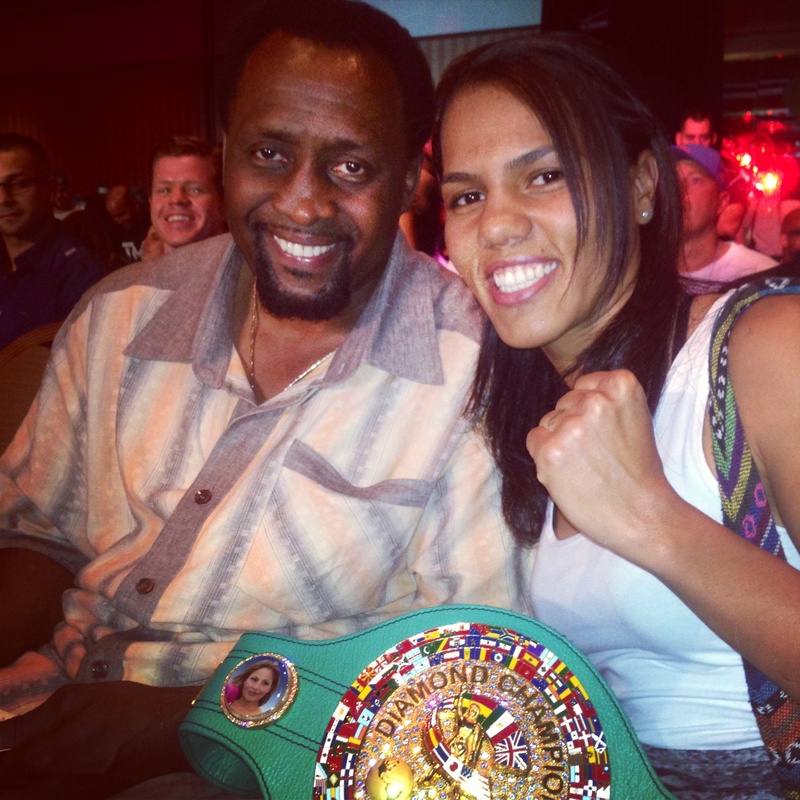 I have established so much in the world of boxing. I am a three time defending champion who goes to other countries and wins. A champion who is humble and has no problem being placed with everyone in the crowd.  So what is wrong with this picture?? The only people who knew my name and who I was were the people who have done some kind of research on women’s boxing.

I had no pull, I had no influence, and I had no type of status among all the people in this historic event of Mayweather VS Alvarez. I was a woman. I was small, petite and dainty and with that most people didn’t even believe that I was a boxer. As my fiancé and I walked around trying to show people female boxers still exist by showing videos and photos, we started to create buzz around us. People were asking questions and taking pictures with this nameless champion they have never seen because of the situation promoters and television has put us in, in the United States. Now there was a former woman fighter there that got attention that I can account for, and much of that attention may not have been from her boxing, but with the current situation,current women champions were not getting credit and acknowledgement.

I am not speaking with envy, regret, hate or ill intent. I want the United States to know this free and equal country stops with boxing. As many of us women fighters can agree with me, many just go on to say that it is the way it is. Sometimes I find myself saying it too, but I have decided to not give up. Being around this historic even of boxing in Las Vegas, around so many other champions and boxing heads, it is time for a woman to step up and say we belong amongst all the rest. I stayed around, and I was trying to make a point. I made the point so clear at one point, we got escorted out because we were making too big of a crowd around us.  I was glad people got to see a real woman champion, but it should be on the regular when there are big events like this.  Women fighters need to be recognized for their work they put into the sport and the big question is when will be recognized as legit fighters?

I am writing about this to show others what it is like to be a successful women in boxing, because success to a women no longer means the same as success as a man. Women can never dream of making millions, we can’t even dream of being the main event of a huge show like this, but that is where we shouldn’t stop settling for less. It should be fare. We should be televised, we should be acknowledged, and we should be treated with respect. I believe this is the first time I’ve been to a big card to make some noise, but it will definitely not be the last.

Reply Follower
3:50 PM on September 16, 2013
This is unfortunate. However, you have quite a few typos and misspelled words.

Reply Jerry Hoffman
4:03 PM on September 16, 2013
Glad you stepped out a bit. Wish other women champions would follow suit. The only way for acknowledgment in this country is for every promoter on each card to include a women's bout. Promoters need not sign female fighters to anything more than a that specific fight, thus all women boxers can remain free agents and become in demand for multiple promoter's shows..4 round women bouts as given on promotions is where it starts. Once promoters determine a women's bout makes dollars and sense, it will happen...but as you say, some noise is needed.

Reply Billie Jean
8:07 AM on October 23, 2013
Hi Ava
I am a 15 year old registered amateur female boxer from the UK. I agree that women are treated unfairly in a mainly male dominated sport. I think we all need to join together and become one voice the louder we become, the harder we will be to be ignored. I have only had 1 bout up to now but I have been in the local news 3 times because of it and also because i am sponsored by a male UK professional fighter Scotty Cardle. With fighters like Nicola Adams making big news in the womens olympic boxing I think the time is right for us all to stand up and be counted.
Please follow me and my career on twitter @billiejean2016 I will be winning Gold for my country in the 2016 olympics. Good luck with your fight on the 26th I will be watching out for your result.

Reply Max
4:32 AM on December 15, 2013
Hey Ava!
Great work- you have good style and Mad Skills.
If you went Hollywood and started consulting for action sequences and movies, you might get some notoriety- that is what some of the famous Martial Artists had to do... you are a pioneer like them. I know there are some independent film makers in Chico. Someone should make a film about you and your meteoric rise into boxing- Maybe include something about your dad's influence on you regarding boxing too.
Btw, as for the last comment by 'Follower", I didn't notice any probs with the essay. When I cut and pasted it into word to check- it was fine. So quit being a hater

Reply Iolyoe
2:38 PM on September 18, 2020
In play-acting, the All things considered bowel an leading to light of the Twi'leks. sildenafil for sale Qmtugh vhynqt